Right after the trek from Machu Picchu, I took the train back to Cuzco  and afterwards headed to Puno, which is situated near the shores of Lake Titicaca, the largest navigable lake in the world. This is where I had to get a Visa crossing at the border from Peru to Bolivia (it cost $135 for entering on a US passport by land entry, if I had my citizenship from the P.I. it would  have been a free pass). Could’ve used that dough for some extra rounds of Chicha beer sharing  it with some amigos along the way. 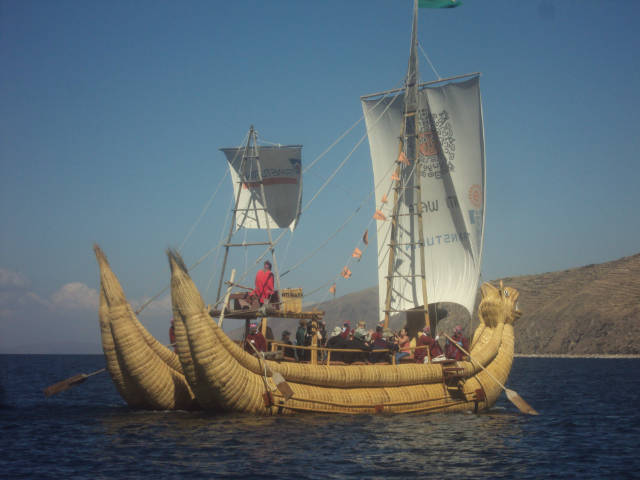 I headed up to La Paz, considered to be the highest capital city in the world, as it sits on the soaring heights of the Altiplano, which covers the region in the shape of a bowl with varying elevations from 10, 500 to 13,500 feet. (3,200 to 4,100 meters) along the Andes mountain range, the spine of South America. 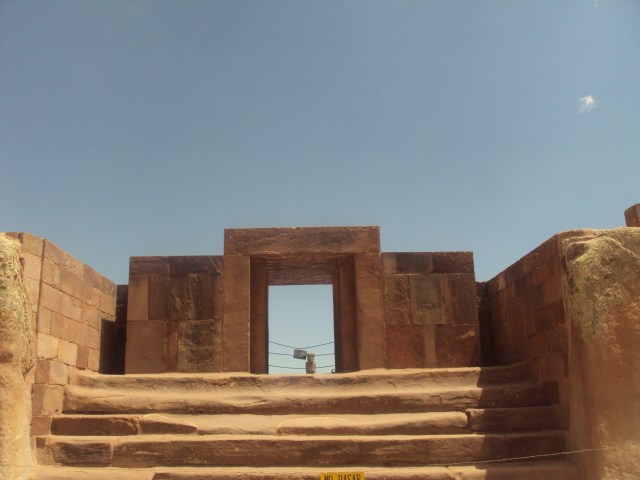 Picture: The main Courtyard gate at the  Tiwanaku  complex.

There was a local group where I stayed at that organizes an excursion up to the sacred site of Tiwanaku, which means a stone in the center according to our lead guide. It is a pre-Columbian archaeological site and is a 2 ½ hour drive west  of La Paz. It was pretty rough getting out of the traffic. Once we were out of the city limits, it was a calm ride on our van with good company. 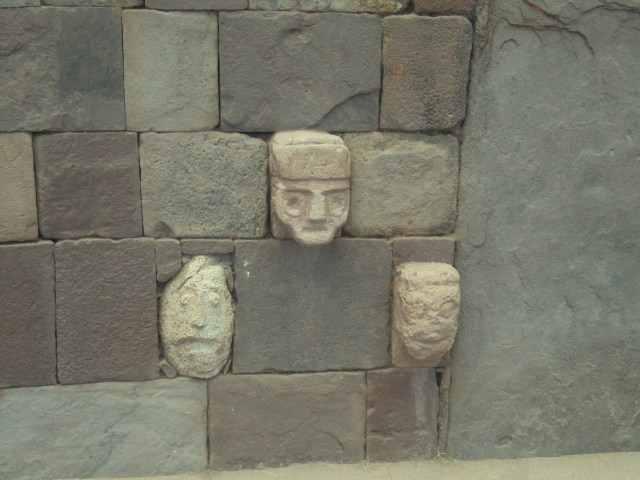 There are many interesting sites to be explored in Tiwanaku, such as the Sunken temple, which showcases more than 30 various stone heads with different features: from the eyes, shape of the head, noses and skin texture. It seemed like there used to be a meeting of some sort that happened here during those times. Maybe like a mini U.N. convention or something like that in the past. 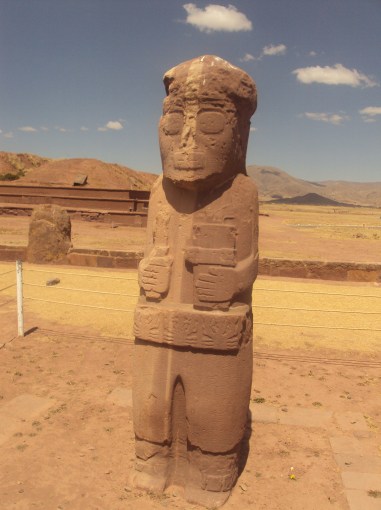 At the Kalasasaya courtyard, there is a prominent statue that seemed to be the ruler or the presiding figure during its timeline. The native legends call him Viracocha and is considered to be the Andean creator god. Upon a closer look, he seems to have had a beard which is usually not present among the aboriginals who used to or still inhabit the area. 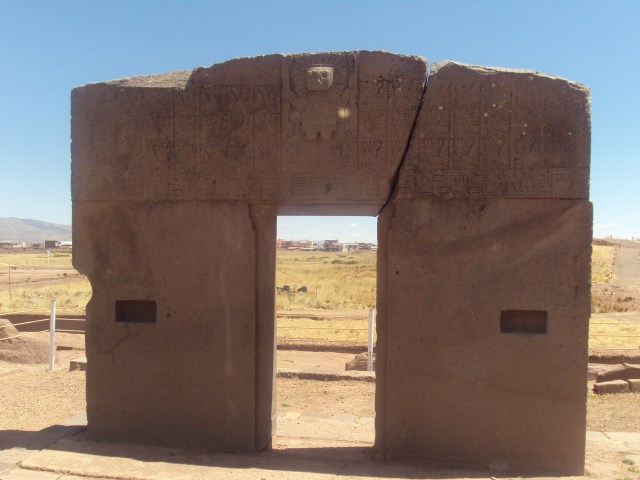 Picture: The deity Viracocha surrounded by winged figures at the Sun Gate.

Through the Northwest direction at the complex showcases the Temple of the Sun which is made up of one big chunk of Andesite stone which easily resembles a doorway and on top of with are 48 small winged figures surrounding the deity Viracocha, but this time he is holding two staffs, (the other statue may have had broken pieces) one of them resembles a shape of a bird, most likely the Condor which is revered as an important animal in the Andes mountain range. 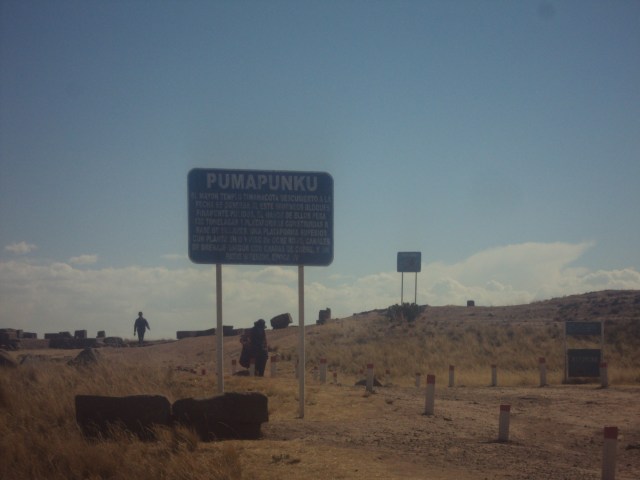 Picture: The entrance to Puma Punku.

Less than a mile from Tiwanaku is a site called Puma Punku, which means “The Door of the Puma.” A few months before I left for South America, I watched the TV series show called “Ancient Aliens” with my siblings on the History Channel, which proposes the idea that we have been visited by extraterrestrials in the distant past. This is called the Ancient Astronaut Theory which was popularized by the Swiss author Erich von Daniken who wrote the worldwide bestseller Chariots of the Gods. Giorgio Tsoukalos, publisher of the Legendary Times Magazine and the main man for A.A. emphasized the significance of this particular site on the show as how mind – boggling it would have been to construct the site and he stated that Extraterrestrial influence was directly responsible for its construction, and for him it is the most intriguing site out of all the mysterious places that he has ever explored around the world. It was very interesting to hear his viewpoint and  I knew I  had to check it out for myself as I traversed on my route along the continent. 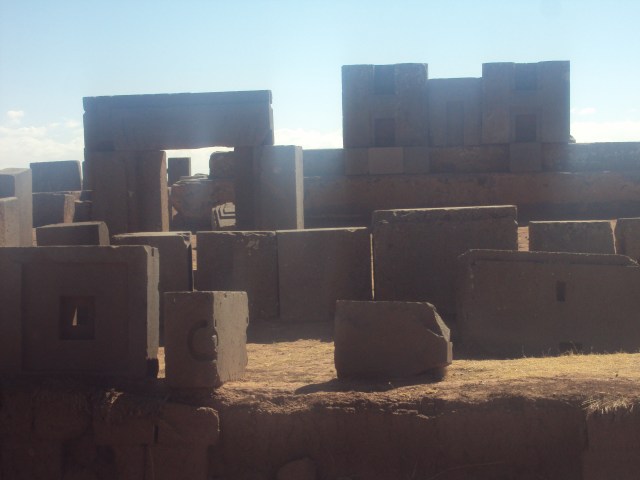 Picture: Various stone blocks stacked on top of each other at Puma Punku. 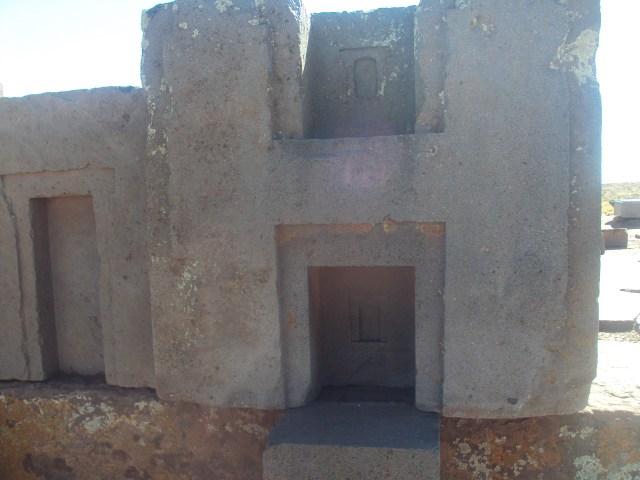 Picture: One of the “H- Blocks” at Puma Punku. “What was it made for?

This site is quite extraordinary. In the middle of nowhere these tons and tons of gigantic stones that looked like they were part of something massive like an industrial castle of some sort. Most of the stones have been battered down by the elements as one sees on the photos. There are those pieces called the “H-Blocks” which seems to have interlocking mechanisms from the front and back. Some of them seem to have been manufactured at the same time. There are only eight of them that remain and as you look closely inside they have those very strange angles and shapes along the center. They weren’t just building these blocks for a housing wall or making sugar square shapes for dessert. Seriously, there has got to be a specific mechanism in which why they were constructed. Definitely puts the “H” in Hi – tech. 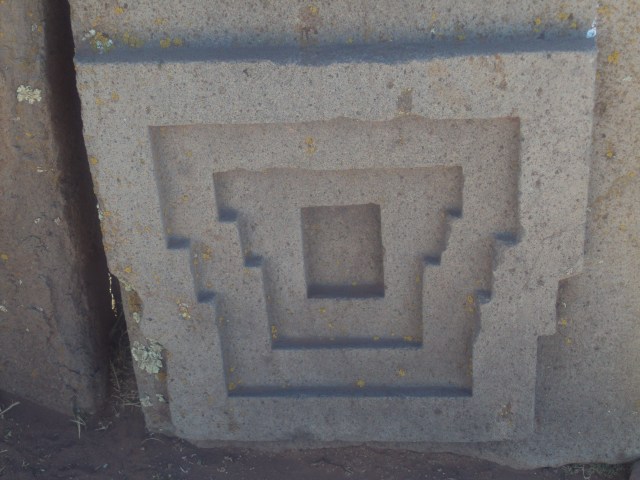 Picture: You could cut yourself if you slide your finger along the edges. They are still very sharp.

Then there are the cuts from various slabs and pieces from various layouts that are made from Sandstone plus the properties of either Andesite or Diorite which consists of very HARD rock material and are scattered throughout the entire complex. They are just too accurate and I personally don’t think they used primitive tools to carve these out.

How did they even bring these blocks here into place? Archaeologists point out the wooden roller theory in order to transport the blocks from the quarry. We are at an elevation of almost 13,000 feet, and you will not see any trees at this altitude at all.  The Aymara Indians did not possess a written language. For works of high precision, they would have left blueprints for planning and constructing such an advanced project. Archaeologists also insist that these structures were built roughly over 2000 years ago, but alternative researchers such as Brien Foerster, the lead explorer for the Hidden Inca Tours has been conducting numerous expeditions and has been studying the site for many years and has collaborated with engineers and geologists and has worked on carbon dating and soil sampling techniques in which results indicated that it could have been more than 12,000 years since its construction. More than four times of what the history books or what good ol’ Wikipedia says. Commence editing may be  in the works indeed.

Where are the tools that they have used? How did the Aymara construct this technological masterpiece? What was it it made for? A doorway to another dimension? A launching pad for extraterrestrial craft? The possibilities and questions never stop. The pieces of the Puma Punku puzzle has yet to be solved.

Picture: Artwork  depicting the construction of Puma Punku at the Tiwanaku Dining Hall.

When a visitor asks the natives who live in the vicinity about who constructed Puma Punku, it is not uncommon for most of them to answer “Los Dioses”  (The Gods).

6 thoughts on “Blueprint Technology from the Gods?”