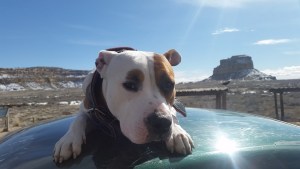 Last February, My Arf-venture dog Seizo and I went to investigate the context of probably the oldest Native American group in North America which dates back to the archaic period during 7000 – 1500 BC according to Archaeologists called the Anasazi which nowadays we call “Ancestral Puebloan” or  “Ancient Ones.”

Remnants of their homes and sacred sites are located in the southwest region of the USA called the Four corners where the states of Arizona, Colorado, Utah and New Mexico meet as this was a vital location because the Colorado river runs through various pocket streams which was essential to their survival.

The first state we explored was in southwestern Utah, visiting the “Mighty Five” National Parks where there are numerous Petroglyphs (rock art by carving or engraving its surface) from highway corner stops to mountain vistas. 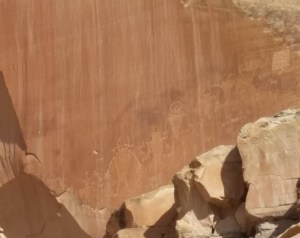 Going towards Western Colorado a week later to investigate Mesa Verde National Park, we got stuck for three days at the nearest town of Cortez since there was a snowstorm which hindered us from going up the site at an elevation of over 8000 feet plus low visibility. Good news was that I was able to take advantage of visiting the Anasazi Heritage Center twice around four miles from the motel where I was able to research information about their existence, from basket-weaving, hunting, stargazing and other seasonal activities they passed on to their successors which mainly consists of the Hopi tribe. 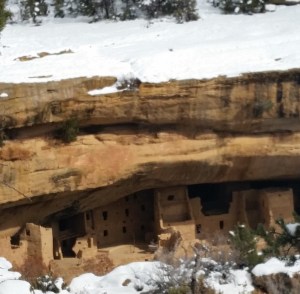 We finally had sunshine after three days, which was a Go-signal to drive up to the largest and best-preserved cliff dwellings in North America. The ascent to the area was tough considering the road conditions and altitude it was located. We were taken by the guide to the Spruce Tree House which was the only site that was open since the other areas were still closed for the winter season as snow plows couldn’t go through. It was quite incredible on how they managed to carve up all the rocks in order to make their living quarters under the Colorado plateau. There are different reasons why they would live underneath the mountain. Archaeologists indicate that it was a good base for their hunter- gatherer lifestyle. The Pueblo people in the area says that their ancestors were hiding from someone or something above the dwellings.

The next archaeological site was in New Mexico called Chaco Canyon and this is the most important site for the Anasazi because stories from the Petroglyph trails have hundreds of inscriptions describing their life in the desert. The Fajada Butte which sits on the entrance of the canyon has carved marks of their astronomical signs from the skies during the summer and winter solstices. Kivas, which are ceremonial sites that all point out that this was the location where they all started to arrive from the main building called Pueblo Bonito. On top of the mountain view, where we climbed looking below and according to legend, there we saw how it resembles the Pleiades Star Cluster as Hopi oral traditions maintain that their ancestors came  from these Sipapus or Portals into the present world. 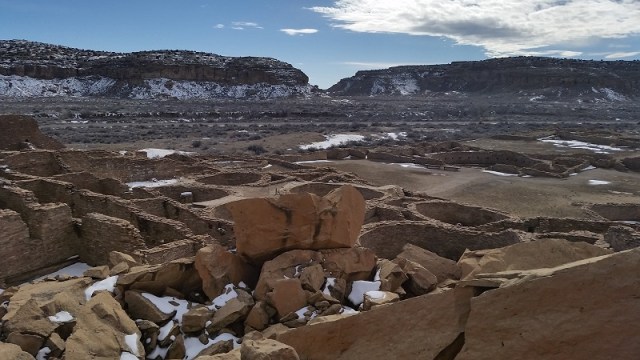 The Anasazi advent set the stage for the migration of the Southwestern tribes where their monuments and temples stood the test of time containing the knowledge of the stars which shines upon the next generation of messengers, who will share the experience and stories of the ancients.

2 thoughts on “The Anasazi Advent”